Our research involves developing a fundamental understanding of the chemical, photophysical, and optical properties of nanometer scale materials. Unlike macroscopic materials, these objects have physical characteristics that are strong functions of their size and shape. Thus, nanometer scale materials have properties that can be easily controlled and manipulated. Currently, our investigations are focused on the synthesis and spectroscopic characterization of the chemical and physical properties of carbon nanotubes and semiconductor nanocrystals, and the application of these materials to solving important challenges in energy, photo-catalysis, quantum optics, and biomedicine. These studies are highly interdisciplinary, and lie at the interface between chemistry, physics, applied physics, and materials science.

We continue to be interested in making improvements to colloidal nanoparticle syntheses,as well as understanding the basic chemical mechanism for how molecular precursors react to form colloidal nanocrystals. In addition, we are also concerned with determining the relationship between structure and chemical composition and electronic and optical characteristics of individual carbon nanotubes, as well as colloidal nanoparticles doped with aliovalent impurity atoms (such as silver). These investigations are carried out using atomic electrostatic force microscopic in conjunction with single molecule optical spectroscopic methods.

Leveraging the unique photophysical properties of colloidal nanocrystals to explore possible applications is also an important aspect of our research. In particular, solar energy can be converted to clean burning chemical fuels such as hydrogen using colloidal nanocrystals as the light harvesting element or photocatalyst. (This work is done in collaboration with Professors Brenand Matsonfrom the University of Rochester.) Also, nanocrystals can be used in combination with inorganic or organic small molecule catalysts to make unique carbon-carbon bonds that are valuable to the pharmaceutical industry for making pharmaceuticals. (This latter work is done in collaboration with Professor Dan Weix from the University of Wisconsin.) Working with Handy Gelbard at the University of Rochester Medical Center, we are developing colloidal nanocrystals as biological mimics and combining them with super-resolution imaging techniques in order to better understand possible origins of disease including COVID long hauler syndrome.

In the last few years we have developed a significant interest in the intersection of quantum optics and colloidal nanocrystals. Active projects include coupling nanoparticles and optical cavities to form hybrid light-matter states called molecular polaritons. We have a fundamental interest in understanding the photophysics of these exciton polaritons as well as using polaritons to perform chemical reactions that are not currently possible. This latter project is the focus of a new NSF Phase I Chemical Innovation Center (QuEST: Quantum Electronics for Selective Transformations).

Single walled carbon nanotubes (SWCNTs) have remarkable properties and many potential applications in different fields of both science and technology. A SWCNT consists of a hexagonal network of carbon atoms (a graphene sheet) rolled up into a cylinder with a diameter typically less than 1 nm and a length on the order of a few to hundreds of microns. Unique properties of the carbon-carbon bond make SWCNTs both extremely strong and flexible. Interestingly, SWCNTscan have either metallic or semiconducting properties depending on their diameter and helicity. While metallic nanotubes are very good electron field emitters, semiconducting SWNTs offer stable and tunable fluorescence in the near-infraredregion (NIR). SWCNTs are potentially useful for applications in diverse areas such as molecular electronics, biotechnologyand bioimaging, energy storage, and quantum information sciences. We have several projects centered around studies of SWCNT photophysical and charge properties using diverse spectrometric and microscopic methods.

Semiconducting SWCNTs are characterized by a complex dark exciton manifold that can heavily influence nominal bright excitonic activity. K-momentum dark excitons (KDEs) are characterized by an electron and hole situated at different momenta; thus, these excitons cannot arise from direct optical transitions. Nevertheless, a photoluminescence (PL) sideband can appear ~130 meV to the red of the dominant E11spectral feature, signaling the brightening of the KDE state. Our laboratory determined that lattice defects on the SWCNT initiate an elastic defect-scattering mechanism that scatters an excitonic charge across momentum space to the KDE state. Subsequent depopulation of the KDE state occurs via a correlated PL-A1’ phonon emission event. The PL dynamics of the KDE state were probed via temperature-and defect density-dependent time correlated single photon counting (TCSPC) measurements, which revealed that mixing between the bright E11state and an additional dark excitonic state is the main driving force that dictates the long KDE state average PL lifetime. Studies like this one highlight the dominant dark state reservoirs that continuously feed bright excitonic activity and support the investigation of the photoactive states that can cause spectral congestion in the telecom band region of SWCNT PL spectra.

As-synthesized,SWCNTs are nominally charge neutral. However, ionic surfactants that are commonly used to disperse SWCNTs in solution can lead to heterogeneous surface charge buildup along the tube.We use electrostatic force microscopy (EFM) to study the spatial distribution and magnitude of charged regions along individualSWCNTs.For dozens of long SWCNTs dispersed with ionic surfactant we found surprisingly large charge density variations all along the tube. Acquiring EFM data from before and after photoexcitation suggests that the ionic surfactant actually creates local electrostatic perturbations that act as barriers for exciton transport, which leads to distinct localized regions of charge.

EFM images of (from left to right) topography, dielectric constant, charge and charge profile for an individual SWCNT covered in surfactant. The inset is the charge magnitude scale ranging from -5eto +5e. Dark (bright) contrast in the charge image is positive (negative) charge. Scale bar is 200 nm.

The impact of the local environment on individual SWCNTs can be further investigated by correlating single molecule spectroscopy (SMS) with atomic force microscopy (AFM), which allows our laboratory to study the optical response of SWCNTs to physical perturbations. Recently, we discovered that regions of individual SWCNTs covered in surfactant aggregates display localized and redshifted PL character. From our EFM measurements, we know that these same regions routinely display greater static charge accumulation. Together, the correlated SMS-AFM measurements and EFM data suggests a strong connection between electrostatic and optical characteristics of SWCNTs. 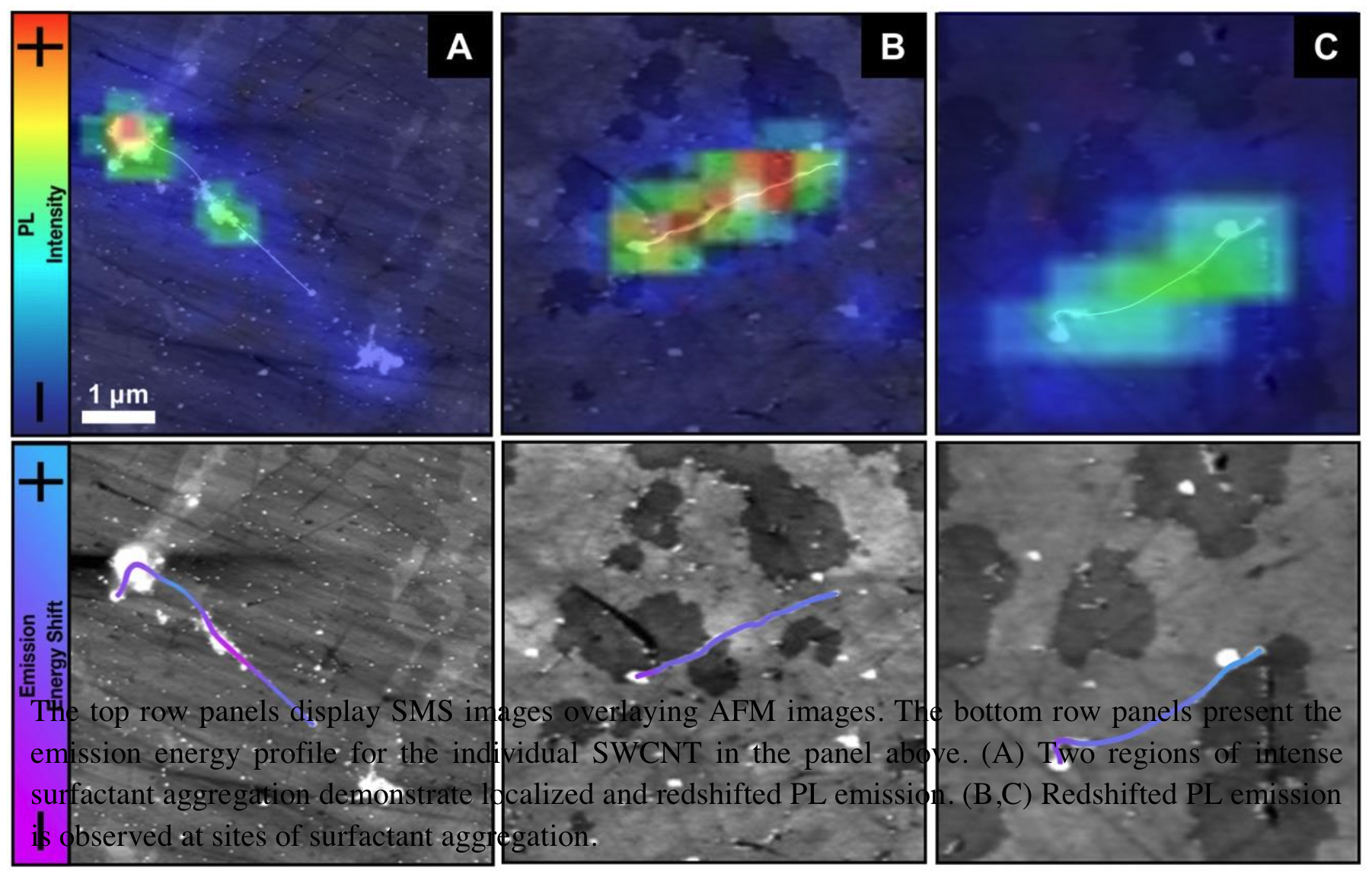 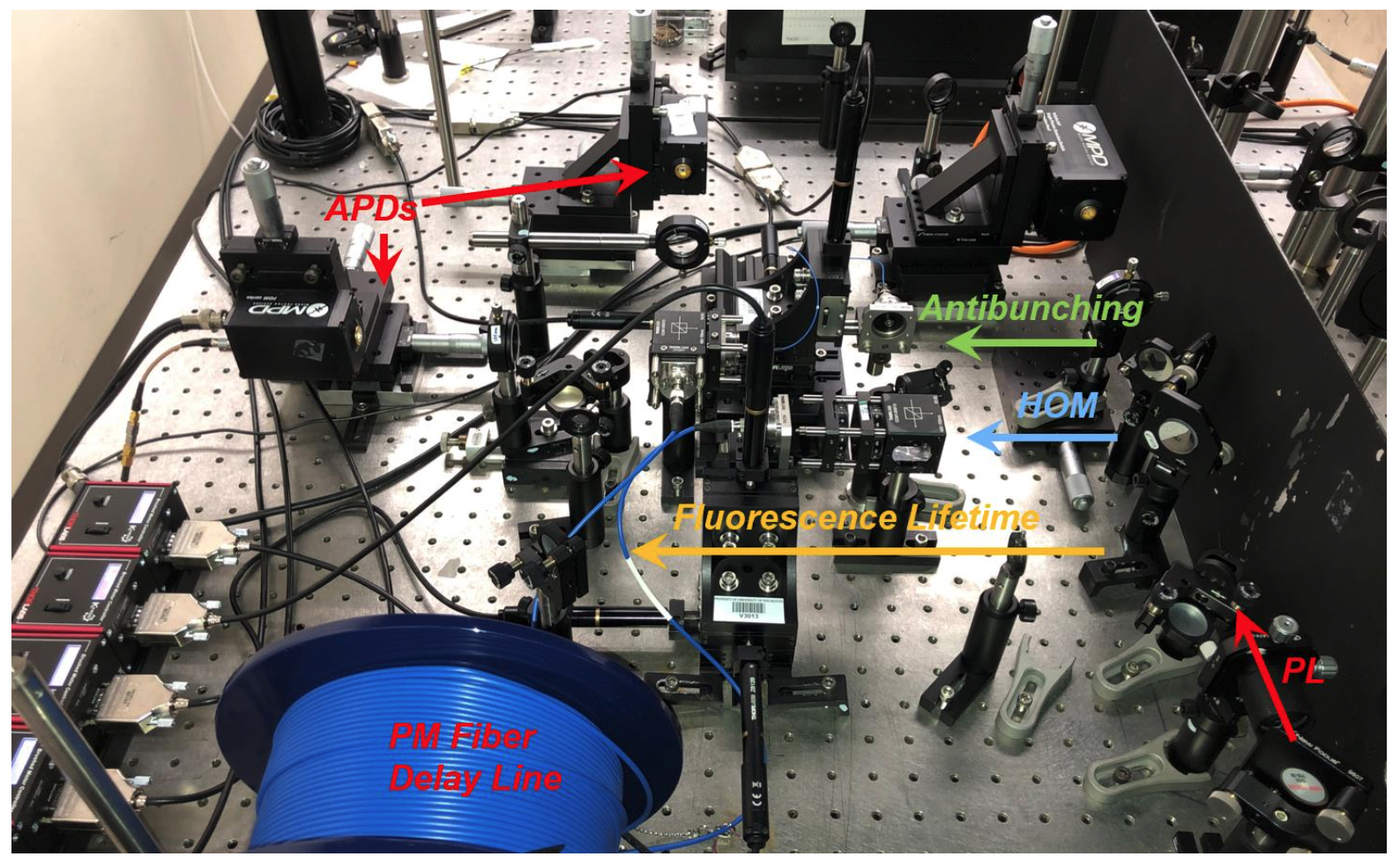 Compared to traditional fluorophores, colloidal semiconductor quantum dots (QDs) exhibit enhanced photophysical properties that are of interest to biological applications, not limited to biosensing and bioimaging. Our previous work specifically elucidated which of these photophysical properties are essential to enhancing the localization precision of single-molecule super-resolution microscopy methods. Yet, despite the potential for QDs to improve the current limits of biophysical measurements, their adoption in biomedical investigations is limited. A key limitation of the adoption of QDs arises from concerns regarding steric hinderances due to the large size of QDs compared to traditional fluorophores. This ultimately necessitates additional control experiments to assess that QD-conjugated targets function similarly to their endogenous and small fluorophore-labeled counterparts.

However, rather than see the larger size of QDs as a detriment, our work is interested in capitalizing on this feature to construct fluorescent biomimetic structures of biological macromolecules. Our initial work, in collaboration with the Nilsson and Gelbard labs, focused on constructing biomimetic QDs for oligomeric amyloid-beta 42 to interrogate the specific subcellular interactions in the central nervous system(CNS)relevant to Alzheimer’s Disease. More recently, we have pivoted this work to construct biomimetic structures for SARS-CoV-2 virus particles, termed COVID-QDs, to elucidate how neurological dysfunction manifests in COVID-19 pathogenesis. The COVID-QDs serve as a proxy to interrogate what interactions the native virus may have in the CNSthat we will be able to observe by taking advantage of the superior optical properties of the QDs.

Semiconductor exciton-polaritons, arising from the strong coupling of excitons with the confined cavity photon modes, have provided new insights into cavity quantum electrodynamics. These cavity polaritons are an emerging platform for exploring light-matter interactions at nanoscale with immense research prospects. Coupling molecules to a quantized radiation field inside an optical cavity has the potential to control photochemical reactivities and open new chemical reaction pathways. Our research focuses on characterizing the photochemical properties of cavity polaritons and exploring their potential applications.

The large oscillator strength of nanoplatelets (NPLs) with highly symmetric in-plane optical transition dipole and their exceptionally narrow fluorescence linewidth make these semiconducting nanocrystalsa promising candidate for achieving strong light−matter coupling.We have studied strong coupling between CdSe nanoplatelets and a metal-dielectric hybrid optical cavity.The molecule-cavity hybrid system has been shown to be in the strong coupling regime with a Rabi splitting of 83 meV,characterized from angle-resolved reflectance and photoluminescence measurements. Mixed quantum-classical dynamics simulations have also been used to investigate the polariton photophysics of the hybrid system. The numerical simulations of the angle-resolved photoluminescence agree extremely well with our experimental data, providing a fundamental explanation of the asymmetric intensity distribution of the upper and lower polariton branches. Our work provides a new platform for investigating cavity-mediated physical and chemical processes which could unlock new types of chemical reactions and studying polariton-mediated charge transfer.

Our laboratory is also a member of the National Science Foundation Center for Quantum Electrodynamics for Selective Transformations (QuEST), an interdisciplinary team of researchers focused on using quantum light-matter interactions to enable new chemical reactivities and transformations that are not currently possible.

Angle-resolved white light reflectance and photoluminescence measurements of the NPL-cavity hybrid system along with theoretical simulation.Data acquired at T = 8 K.

Synthesis and Characterization of Colloidal Nanocrystals

Colloidal semiconductor nanocrystals (NCs) are an important class of material due to their rich diversity in structure and optical properties. Precise control over the morphology, and subsequently optical properties, of these materials have afforded solution-processed nanomaterials a breadth of applications in lasing, bioimaging, solar light concentration, and more.

Our laboratory is currently involved in many projects utilizing colloidal quantum dots (QDs). We are part of a collaborative effort focused on using QDs as photo-redox catalysts in organic reactions. By probing mechanistic details and investigating the potential reactions that QDs can favorably catalyze, this work showcases how the unique properties of QDs can be used to redefine chemical reactivity. We also work with the Matson and Bren laboratories here at the University of Rochester to study the use of QD-sensitized photocathodes for hydrogen production. Fabrication of QD photocathodes via deliberate synthetic and engineering techniques will enable the efficient shuttling of electrons and holes from the electrode to the solution.

(Left) General scheme detailing the use of colloidal QDs as photo-redox catalysts in organic reactions. (Right) A rainbow photocathode (PNAS, 2017, 114, 43, 11297-11302) as well as the corresponding energy levels of different-sized CdSe QDs and the possible electron transfer process between them.

Recent advancements in the synthesis of colloidal semiconductor nanocrystals (NCs)have produced atomically flat NCs known as nanoplatelets (NPLs). NPLs exhibit quantum confinement in only one crystal direction which leads to strong dependence of the emission and absorption features on the thickness of the NPL. This NC dimension can be synthetically controlled with monolayer precision producing homogeneous samples and narrow ensemble linewidths which are essential for applications in lasing and LEDs.

Our research surrounding NPLs focuses primarily on the cadmium chalcogenides which are currently of great interest in the NC community. Our group is particularly interested in the optical and electronic properties of NPLs with various thicknesses, lateral areas, and chemical compositions. Specifically, we are interested in examining the binding nature and electronic effects of heterovalent dopant ions that are incorporated into the NPLs. These dopant ions can localize excited charge carriers, which results in unique optical and chemical properties.In addition, our group is working to combine concepts from natural photosynthesis with the attractive photosensitizing properties of NPLs for renewable energy applications, such as hydrogen production via water splitting.